A Model Slave Meets Her Master 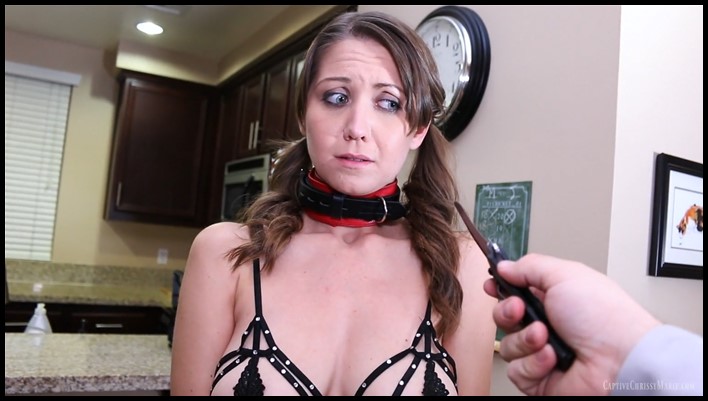 A Model Slave Meets Her Master
34:11 video
A continuation of the plot from video 0162 "A Model Slave" –
Chrissy is lying on the floor in a hogtie with a rope gag running through her mouth and connected to the hogtie. The photographer wakes her up and start to untie her, telling her its shipping day. She tries to plead with him to no avail. He hands her an outfit to put on and tells her to put her hair in pigtails. Once shes done he puts a collar on her, telling her that it will shock her if she tries to escape. He walks her out to his car, where he has her get in the trunk. Once inside, he zipties her ankles, thighs, wrists and shoulders together, and knocks her out with a needle.
The scene transitions to Chrissy asleep inside a cage. Her new Master, Mr. K, approaches her and presses a button on a remote, causing Chrissy to be jolted awake by a shock from her collar. She is very confused, and is asking where she is while cowering in fear. Mr. K tells her that she is in her new home and he is her owner. He tells her he enjoys breaking down haughty whores like herself into his obedient pets. He opens the cage door and has her crawl out, which she does as shes looking around and shaking in fear, trying to make sense of the situation. Once out, he grabs her by the hair and has her stand up. "Lesson one, every time you are in my presence, you will have your mouth open and tongue out." She starts crying, saying she just wants to go home. He threatens her and orders her again to do as shes told. She dejectedly opens her mouth and sticks her tongue out. He tells her every time he gives her a command, that she is to respond "yes sir Mr. K sir, your whore will obey" and has her repeat that mantra a few times.
He then takes her on a tour of the home, showing her the kitchen where she will be expected to make him food every day, showing her different rooms that she will be expected to clean. He brings her back to the living room and says he wants to inspect her more closely, and has her strip naked. Once naked, he has her stand with her legs spread, tits stuck out, ass out and mouth open with tongue out. He grabs her tits and ass roughly, slapping her thighs, tugging on her hair as if inspecting merchandise. He has her bend over and grab her ankles, then slaps her ass roughly. When he inspects her mouth, he comments that her mouth will be filled frequently. Once hes done, he gives her a maid outfit to change into, and tells her she has five minutes or shell be shocked.
Chrissy returns after changing but forgot to have her mouth open and tongue out. Mr. K grabs her by the hair and asks her if she forgot something. Chrissy apologizes profusely, then opening her mouth and sticks her tongue out. Mr. K laughs, saying some whores learn slowly and presses the button, shocking her. He applies a leash to her collar, and has her get on all fours and crawl to the next room. There he shows her a Jennings and he tells her that this always makes his pets learn. He puts it on her, opening it up wide. He tells her that she will have this on for the rest of the day and hopefully shell learn her lesson. He has her crawl back out to the living room, and once there removes her leash. He tells her to go make him some food and get him a drink, and Chrissy does her best to say the mantra despite the gag holding her mouth wide open. The camera follows her as she prepares the food and drink then returns to Mr. K. He removes the gag and tells her to stand there and stick her tits out while hes eating. Soon after he grabs her and puts a duster in her mouth, ordering her to clean the living room. Then he changes his mind and calls her back to him, telling her to do a sexy strip tease dance for him. After shes stripped fully nude, he tells her that its time for some rest and has her crawl out again.
Chrissy is now in black thigh high stockings and severely tied up, hogtied by her pigtails to opposite heels and wearing the Jennings gag while resting. The man shocks her to wake her up, and he crouches down to her level, asking her if she learned her lesson. She nods yes profusely and he removes the gag then unties her while telling her that today hes going to see how good of a pet she can be. The scene transitions to Chrissy wearing nipple bell clamps. He tells her he wants her to walk around in a circle like a pony, lifting her legs up high with each step. Initially she doesnt do a good job, and then she gets shocked a couple times. Eventually she does better. He tells her that her new name will be Sparkles the pony and has her stop and trot in place in front of him while saying "I am your pet Sparkles" repeatedly. Eventually shes extremely tired, barely able to trot while repeating the mantra. He tells her that he wants to show his new pet off to his friends, and ties a crotch rope on her with a leash attached to it. He walks her around in a circle a few times while she lifts her legs up high, and leads her out. 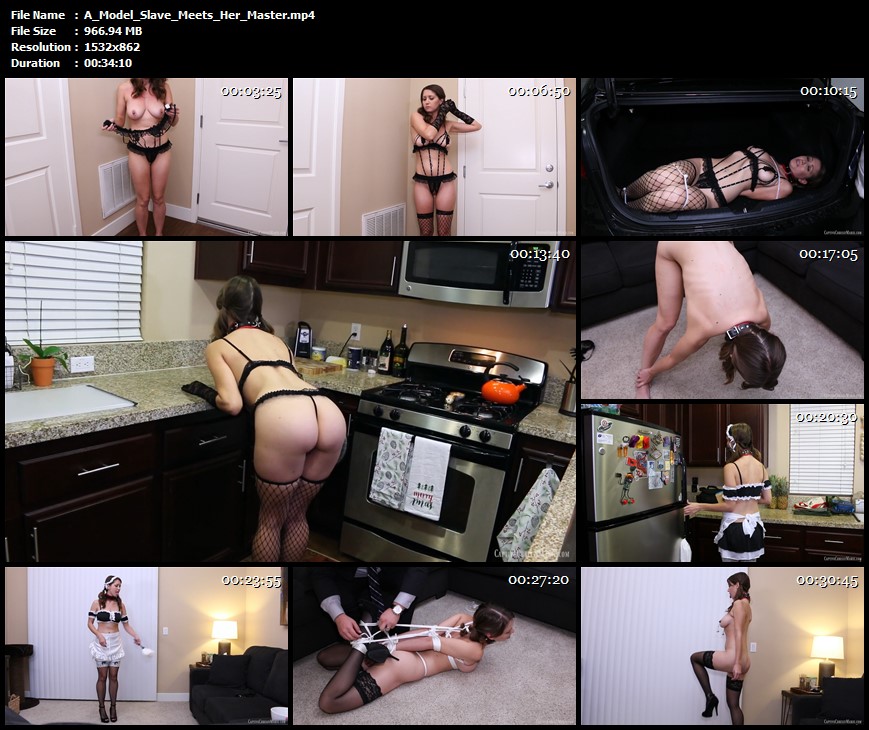