Intruder Double Tied His Wife and He Liked It 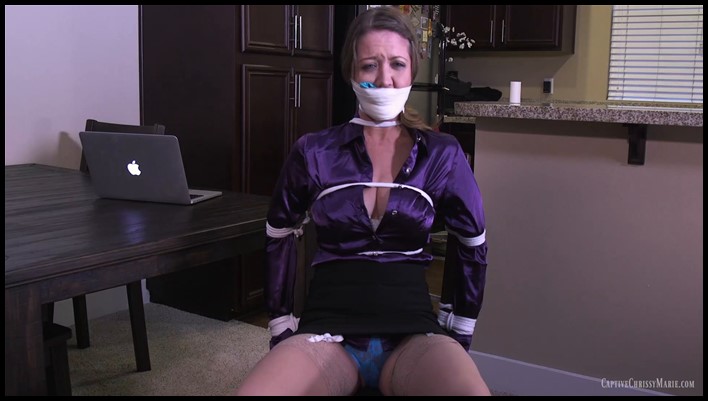 Intruder Tied Up His Wife & He Liked It!
16:41 video
Chrissy just got home and is finishing up some work on her computer while she waits on her husband. Little does she know an intruder broke in the kitchen window while she was out, and now he has to do something with her in order to get upstairs where the valuables are. He sneaks up behind her and hand gags her tightly as she freaks out and tries to scream. He tells her to stop struggling, and that he is going to remove his hand but if she says or tries anything bad things will happen to her. She shakes her head in agreement, but he still has to keep her from trying anything stupid, so he starts tying her up to the chair with rope. However it doesnt take long for her to start asking too many questions. So he asks her where her bedroom is and finds the biggest pair of panties she owns. Really getting frustrated now she calls him a son of a bitch and thats the last straw. He packs her panties deep into her mouth and wraps micro foam tape all around her head multiple times to silence her angry screams into pathetic mmppphss. Once tightly chair bound he goes to find her jewelry and she struggles intensely to escape. After a while she is about ready to give up when her husband finally returns home, of course hours late! She is initially relieved and tries to get him to take that horribly tight gag off, but to her horror he thinks that she had someone tie her up like that just for his enjoyment! He is excited having always been interested in seeing his pretty wife bound and gagged like this, but he wants to make the experience special, so he tells her to wait for him while he goes to take a shower! She is so angry that her husband is such an idiot! Having overheard the conversation the intruder returns, telling her its unbelievable how much of a fool he was, but at least he can have some more fun with her while he is busy in the shower. He starts to untie her so that he can strip her down to her lingerie, garter & stockings. Then he ties he up again (off screen) this time bound to the table with her arms over head in an excruciating and humiliating position. He continues looting the place while her delusional husband is in the shower and she tries her best to find a way out of her predicament. Before he makes his getaway he makes one last stop since he couldnt help but check out those fantastic tits, but her husband is out of the shower now so he knows he has to go. She begs him not to leave her like this, not knowing if her husband will get the hint when he returns! Hopefully he cant be dumb enough to believe she could get free and tie herself up again all on her own! 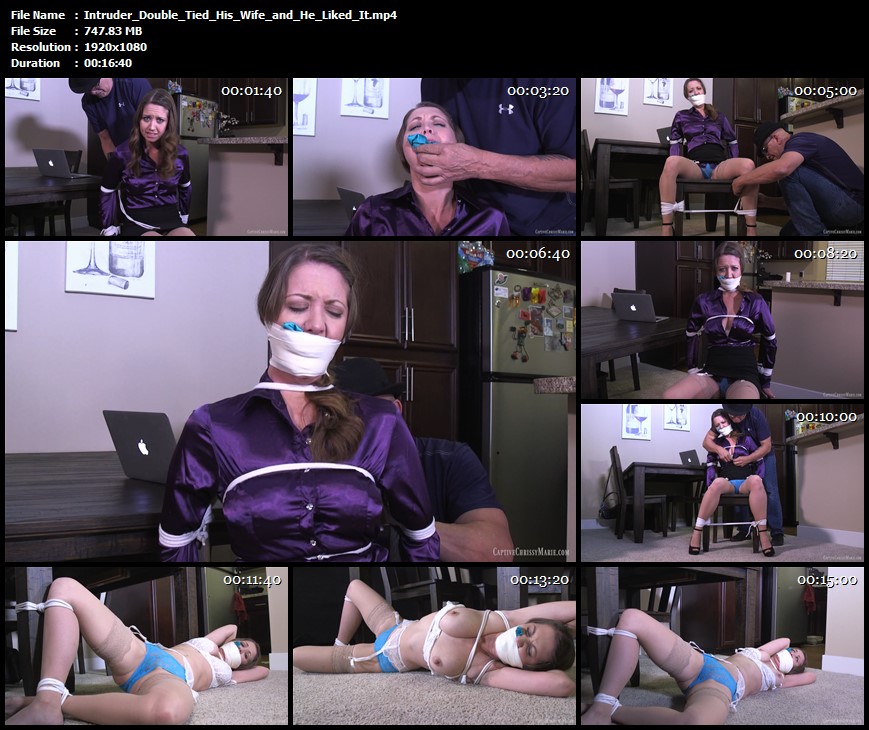